Please read all the following information about BAN in order to get an overview of the facts related to establishing or joining local BAN Chapters: 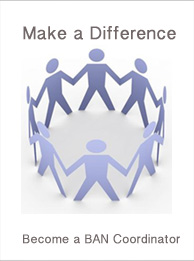 The Need For BAN – Support Groups for Betrayed Spouses

The need for BAN (and the benefits of BAN) are clearly illustrated by reading some of the Testimonials from BAN Members. Now that BAN is established in its current form (with local support groups for face-to-face meetings), my goal is for BAN to continue being available to serve those who need it for many, many years to come—until eventually it becomes as common and available as Al-Anon and so many other support groups.

Toward that end BAN’s founder, Peggy Vaughan, set up a process by which BAN will continue indefinitely. For instance, as each local Coordinator feels a need to move on, they try to identify someone in the group to take over the role of Coordinator so the local group can continue. And we are engaging the professional community in referring their clients to BAN and supporting and mentoring the local volunteer Coordinators who work directly with the groups.

Frankly, BAN is a life-saver for people struggling alone to deal with a spouse’s affair. The isolation of dealing with this alone can make a bad situation even worse, whereas BAN provides support and strength from people who understand and identify with the issues a person faces. There’s nothing like interacting with others who have “been there.”

Below is a long excerpt from Peggy Vaughan’s book, The Monogamy Myth, that explains the need for BAN—and the benefits of support groups. The italicized quotes are from some of the first BAN members’ reports about their personal experiences with face-to-face meetings back in the 80s. (BAN members are encouraged to read the book as a common base of information and perspective.)

THE NEED FOR BAN SUPPORT GROUPS

The Benefits of Support Groups

One of the most powerful benefits of support groups is their ability to break through the sense of isolation that many people feel who are dealing with affairs. Most people tend to withdraw from life and from interactions with others, and even the prospect of talking to others who share the same experience can be frightening. One woman described sitting in her car in the parking lot for 15 minutes before getting up her nerve to go in to her first support group meeting.

When she finally did go inside, she was surprised to find that thoughts and emotions she thought were uniquely hers were shared by others. For a long time she sat quietly listening to others in the group, then finally spoke up to say that she had been secretly convinced that no one had ever felt the pain she had felt, but now she knew she wasn’t alone.

Others commented on how good it felt to talk to someone who had “been there.” They found it comforting to have others say, “I know what you are going through. I’ve been there myself.” This often creates a bond of common understanding that gives a person strength to face their own problems.

Here’s the way one person reflected on the healing benefit of this kind of group sharing.

Another benefit of the meetings is that a person can gain a perspective of their situation that isn’t possible when dealing with it alone. They see other people at different stages of recovery; they see some who are at a similar stage to their own, some who are better off, and some who are having a much more difficult time at that point. Due to this variability, support groups provide an opportunity for people to give as well as receive. When people are struggling with a mate’s affair, they tend to feel weak and powerless. Frequently, they can regain some strength and confidence by helping others who are going through the same thing.

Sometimes those who have survived this experience and want to reach out in supporting others are frustrated because there’s no clear way to go about it. Even tentative efforts to open up the subject for discussion may be met with uncomfortable silence, if not outright resistance.

It’s always hard when people are breaking new ground and trying to go against the prevailing norms. It’s not easy to speak out about personal experiences when society is saying it’s not appropriate to do that. If those who want to be of help are to have any realistic chance of making a difference, it’s up to all of us to help create a climate that makes it acceptable to discuss these issues more openly. It’s a delicate subject, but it’s time we made an effort to support those who are willing to speak out.

There are groups for almost every other problem facing society today (alcoholism, child abuse, rape victims, drug abusers, cancer, AIDS, etc.), but there is no national organization devoted specifically to dealing with this issue. This is yet another illustration of the degree of secrecy surrounding affairs. It’s one of the most prevalent problems in society today, but it’s still not formally recognized as a legitimate societal issue.

No one is immune from having affairs disrupt their lives or the lives of those they care about; they happen to all kinds of people, in all walks of life. Traditionally our attitude has been that unless it touches us personally, we deal with it by ignoring it, denying it, or condemning it. Unfortunately, this does nothing either to help deter affairs or to deal with their consequences. If we’re to be the kind of caring, compassionate society we aspire to be, we can’t turn our backs on the countless people who are suffering alone.

For the person who knows their spouse has had an affair and is still trying to understand why, acknowledging the prevalence of affairs in our society can help them put it in a more realistic perspective. Understanding just how many others face the same situation (regardless of who they are or who they’re married to) can help break the sense of being so alone, isolated, or “singled out” for this experience. It can help overcome the feeling of “why me?”

In the first shock of discovering a mate’s affair, many people have a desperate need to turn to someone for immediate comfort and support. The irony of this situation is that they can’t turn to the person they would normally lean on in a crisis situation (since it’s this person’s affair that has caused the crisis). So most people turn first to friends or other family members.

A person who finds out for sure that their partner has been having an affair is likely to feel overwhelmed with emotions–pain, anger, embarrassment, resentment, bitterness, and a sense of loss. Despite the degree of suspicion or the nature of the confrontation, no one seems to be fully prepared for the pain of knowing the truth. One woman described how she had known it instinctively for a long time, but was still devastated when her husband told her he was having an affair.

One reason it has taken so long for society to recognize the seriousness of this problem is because of the way most people keep their pain hidden, if at all possible. Some people become obsessed with the idea of keeping their experience secret from others. One man said this was his most pressing concern, that, in fact, he had become almost paranoid about other people “knowing.”

The process of keeping this information from others increases the feelings of shame and embarrassment (because if it weren’t seen as shameful, it wouldn’t need to be kept secret). And the longer it’s kept secret, the stronger the feelings of shame. So the secrecy and the problem with self-esteem serve to reinforce each other. It’s hard to talk openly when you take it personally, and it’s hard not to take it personally if you are closed off from outside sources that could help in getting beyond the strictly personal interpretation. An important factor in rebuilding self-esteem is breaking this cycle of secrecy and isolation. The first step is to honestly discuss this situation with just one other person and talk to them about your feelings.

For both men and women, much of the pain and frustration of dealing with affairs is directly linked to this effort to deal with their fears while hiding their feelings from the outside world.

A person needs to be able to talk about what has happened in order to recover a sense of equilibrium after discovering their partner’s affair. When they try to deal with it alone, they often become even more frustrated and confused.

As discussed earlier, the isolation suffered by people in this situation is often motivated by their desire to avoid the sympathy and pity of others. This was the case with me, at least in the beginning. When I began to suspect my husband was having affairs, I tried to hide it—from friends, from family, from everybody! I didn’t want other people to see me as pitiful or feel sorry for me.

Unfortunately, this has been an understandable fear. The general reaction in society as a whole has been to feel sorry for people in this situation, or to see it as a reflection on them personally. There’s a tendency to think they’ve failed to be all they should have been to prevent it, or at the very least that they should have known it was happening and done something about it (usually meaning either giving an ultimatum or getting a divorce). It will continue to be difficult for people to talk openly about their experience with affairs as long as we as a society are so judgmental and limited in our own understanding.

This habit of hiding our personal problems is slowly changing as we recognize that most of our problems are shared by others who are also putting on a front. It becomes much easier to admit a problem when society recognizes that the individuals dealing with the problem are not personally to blame for it. We’ve seen the benefit of this kind of understanding in a number of other areas, most visibly that of being an alcoholic (or the adult child of an alcoholic), or a victim of incest or physical abuse.

Of course, it’s easier to talk to someone who has had personal experience in dealing with affairs.

The reason it’s so important for people struggling with affairs to talk to a person who can be truly supportive is because the point is not simply to talk, but to process the feelings in such a way as to make the situation feel a little bit different, a little more manageable. Since this is a very complex problem, the process of talking about it has to be done over and over. It takes many sessions of talking with different people in order to move the process along.

(End of excerpt from The Monogamy Myth)

Next Read: BAN Guidelines (includes Guidelines for Participation and Interaction)

Sign up for our Newsletter- Rebuild your life today.